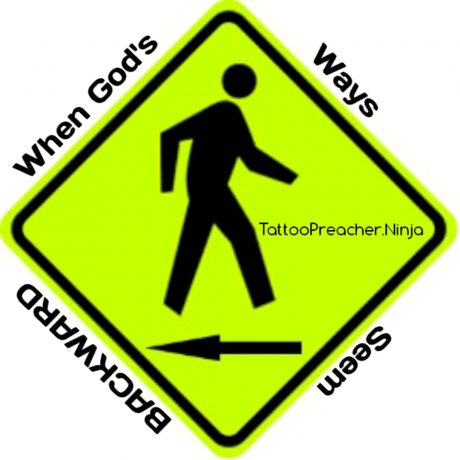 In the corporate world typically the model is kick butt and take names and you’ll get ahead, when the bible says the way to get ahead is to give. The seeming law of progression in the corporate model is promote yourself, step on the shoulders of the guy next to you or you’ll be working for him next year when the bible says promotion comes from the Lord and to love your neighbor as yourself. It almost seems counter intuitive doesn’t it? It’s as if there are two opposing sets of rules… Well, THERE ARE!

In life we can live by the rules of the kingdom of God or the kingdom of sin. Both produce varying results but only one will allow me to keep my integrity and sleep at night.

In recent years I’ve gone from the top, to rock bottom and now I’m well on my way back up. During that journey I’ve had many learning opportunities. I remember a few years ago, I was working in a volunteer position for a church for a year. A guy came to the church with a very specific skill set that our ministry needed and instead of trying to exalt myself, I went to the pastors and recommended them to hire him when I actually was out of work and next in line for a spot.

Even this past week I was speaking at lunch with a CEO who hosts major events and hires professional speakers for training. I could have taken that opportunity to “share my story” and pitch myself for a slot fill, but I felt like the thing to do was to tell him about my friend who also does what I do — traveling and speaking around the country. So, I did like I’ve done many times before when I felt in the moment that what God was wanting from me was to use my influence to lift someone else up rather than promote myself.

Some would say that was stupid, but I don’t think so. I don’t know how many of my friends would have done that for me yesterday but my bet is, according to the kingdom from which I operate that number will go up exponentially tomorrow. You see, I believe that when the bible says “you reap what you sow” that is a natural bi-product of my kingdom allegiance. Promoting my friend was my way of “loving my neighbor as myself”. If a kingdom divided against itself can’t stand, then I won’t play both sides of the fence and will be true to the one kingdom that allows me to experience blessing from being a blessing. It may not make sense but when you see where it ends up taking me you might wish that you too had planted the same sacrificial seeds. Being able to sleep at night knowing you did the right thing sure feels good…see you at the top!