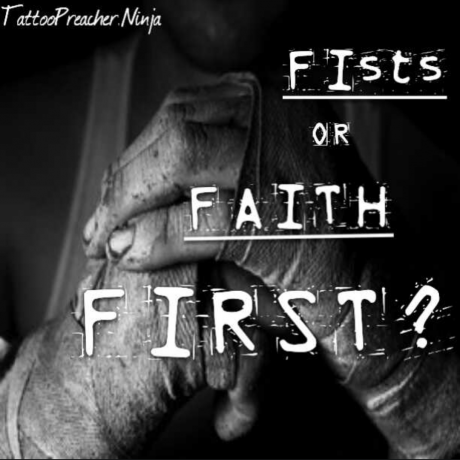 Rocky came home from school visibly shaken from an altercation with another child who has been picking on him all year and got physical with him on Friday… And I was faced with a fatherly dilemma.

I’m not raising a child, I’m training a man, and conflict resolution is an essential aspect of becoming a man. Sometimes you unsheathe your sword and sometimes you don’t. Discerning the proper times are essential and this has been a hard lesson for me personally. There is a part of me that loves to fight and there is a part of me that despises the need to…and I’ve not always chosen wisely.

I don’t want rage, fists and aggression to be my son’s first response to confrontation but I also don’t want him to fear it when the time comes to let the warrior out.

The first lesson I decided was to teach him to pray about it. On Saturday and Sunday night when we said our bedtime prayers, Rocky prayed that this bully would be blessed and God would help him be nicer to people.

As I kissed his forehead I told him that we would first allow our prayers to take effect and talk to the principal and see if that resolved it BUT if more needs to happen then his daddy would teach him to defend himself effectively. I let him know he would not be in trouble if he were ever placed in a position that he was forced to defend himself as long as he understood that exercising other options were to be the first and better choice.

Rocky is a naturally loving kid, so discerning what it means to train up a child “in the way HE should go” is often difficult for a dad who did it the wrong way himself. I ask the Holy Spirit for wisdom and hope I’m training a man, a warrior who will be more inclined to keep his fists in his pockets than to throw them. I hope I am equipping him to be wise enough to avoid some of the more painful lessons that I’ve had to learn the hard way… I think I am…