30 Second Sermon: What If Everything You’ve Been Taught About God Was Wrong

Official Site of the Tattooed Preacher > Christianity > 30 Second Sermon: What If Everything You’ve Been Taught About God Was Wrong 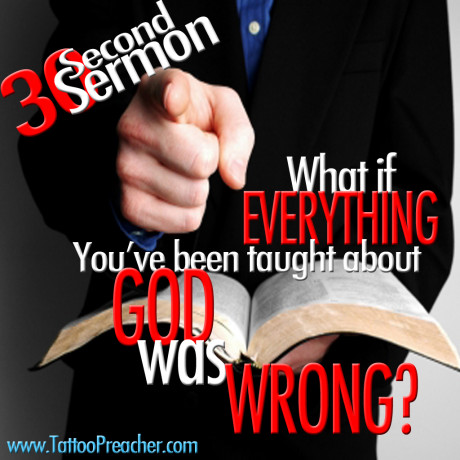 Most of my life I was taught that God hates sin, which translated in my mind to me becoming the object of that hate when I sinned and concluding that God was mad at me as long as I had sin in my life that I had not asked for forgiveness for. As a pastor, I have heard many say that this is how they too have processed God, believing that God is angry with them and often times that they are being punished by God because of unresolved sin in their lives.

What if many times what we assumed was God’s punishment for an action(s) was actually just the fruit of that seed we ourselves planted…? I just wonder if it’s possible that God actually does love us more than we can imagine and we’ve been seeing our circumstances through the wrong lenses.  What if God is at least as loving and as good of a Father to me as I would be when it comes to my own children…?

My new book Quantum Christianity: Believe Again ~ Discovering the Science of Scripture. Uncovering the Mysteries of Faith ~ addressing subjects like this one and many more is slated for release on May 8th, 2015.