Weighing the Cost of the Contradiction 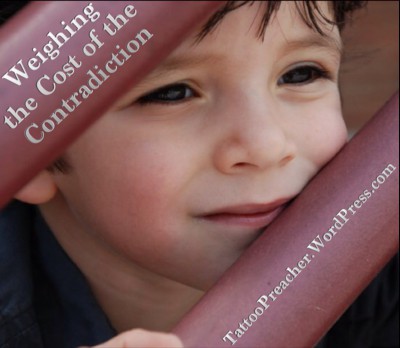 I instilled this in him from the time he was old enough to talk because, as a child, I was afraid of everything… Many times tormentingly so…I wanted my son to have a foundation of faith in God before he learned faith in fear…

It’s not that he will never “feel” afraid but rather understanding that fear is not a part of his inheritance because God has made provision for more.

As it pertains to anything that conflicts with what Christ paid the price for, I believe that it is important to bear in mind that it’s not that we may never experience the contradiction, but rather acknowledging that we CANNOT rewrite our theology to make the contradiction acceptable.

Sometimes you just have to resolve that when you have done all to stand, you will simply stand on the promise of what Christ has provided in spite of what we feel or see because what He has given us is greater than the enemy’s efforts to contradict His provision.

I leave you with this question and await your input in the comments of this blog, Do you believe that Christ provided more than many experience?  Why or Why Not…?