Official Site of the Tattooed Preacher > Christianity > Using “The Force” 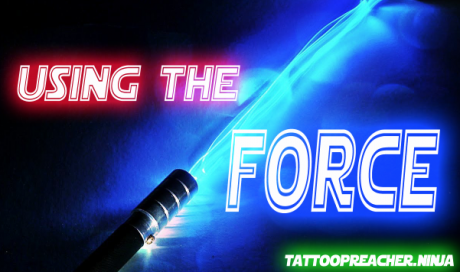 In parallel to my own life, as I observe people around the world, it seems that the determined extension of faith is a major catalyst for breakthrough and experiencing the supernatural. Particularly interesting to me is that this extension of faith does not seem to be limited only to the Kingdom of God, leading me to believe that faith is a force (a law if you will) that was instituted to be exercised in this physical realm by human beings. I believe that this force was intended to be supernaturally creative within the Kingdom of God, but that it can also be intentionally tapped to establish opposing kingdoms as well. One thing that also appears to be consistent to me is that, regardless of the kingdom “allegiance” (or lack thereof), unbelief or the lack of the extension of faith also has universally consistent results—NOTHING. In other words, those who do not release or extend faith do not experience any benefits of it.

There is so much to this subject that I cannot confine it to a 30 second sermon, but I will elaborate a bit more on it in tomorrow’s blog.  Also, I have been working for several years on a new challenging book titled “Quantum Christianity” which does deal in depth with this subject (along with several other deep considerations like, “the will of God”, “how God can be who the bible says He is while allowing the world to be what it is” and many others subjects…) to be released 1st quarter of 2015… Until then, Enjoy the blogs!

If you think this may influence someone you know, please feel free to share it on your own social networks.