Weighing the Fruit of Inconsistency 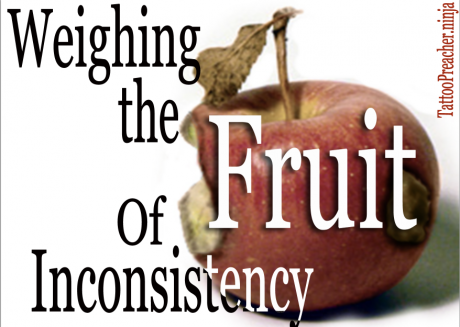 You have been called to a ministry of significance!

I was recently reading the book of a pastor of a megachurch and he made the statement that being “on time” or “punctual” is simply not a priority to him. When I read this, I paused for a moment and thought, “if this is the case with a man of that level of impact, then there is a failure to understand the importance of perceived integrity”.

Human beings do what they believe is important. If you want to know what a person truly believes, watch their actions… YOU WILL KNOW THEM BY THEIR FRUIT because people’s actions simply reflect their belief systems & values.  “Time” for the sake of this blog is inconsequential, but the root of not prioritizing it is SIGNIFICANT!

What you value is perceived by others by your actions and your influence with them is then weighed.  Although it seems like a “little thing” ask yourself, what message is being conveyed when or if this leader is repeatedly late? Furthermore, what inconsistencies are being replicated in his team as a result? After all, you often impart who you are.

The bible says to “do all things as unto the Lord “and “those who are faithful in the little things will be ruler over much…”  I’m not criticizing this leader. He obviously is doing a lot right! I just wonder if it’s possible that he excuses an inconsistency in his life for a failure to perceive its importance.

Perception determines reception and if we do not discern what the perception of others will be when we handle what we may view as “little” things, then our reception and influence can be compromised, often unbeknownst to us. This is particularly important when you are talking about ministry and representing the Kingdom of God.

Your actions carry non-verbal messages that speak much louder than your words, and it is important to never lose sight of the fact that the foundation of anything great most often consists of “little things” that seem inconsequential…and consequently, it is often the repeated succession of a failure to do “little things”, little cracks in the foundation if you will, that are the downfall of that which was built upon it.

If you would not be late for a meeting with your most respected mentor, or a tee time on that high dollar golf course or a coffee with someone who was going to give you a large sum of money, but are late to serve as a volunteer in the nursery at the church, then whether you realize it or not, your actions loudly convey your value system and express what you truly perceive to be important.

Perception determines reception and this is a failure in perception because, to God those babies are just as important (if not more)…and honestly, you prioritizing them is likely MORE important for your progress than any of the above circumstances that you would be punctual for…

Whether you are cleaning toilets or leading the masses, it is still the faithfulness in the little things that sets you up for your next level of leadership. Don’t become so content or familiar with where you are that you lose sight of the essential “little foundational building blocks” that will be the strength & support of where you are supposed to be going.