Official Site of the Tattooed Preacher > Christianity > “Smarterness” is a Virtue 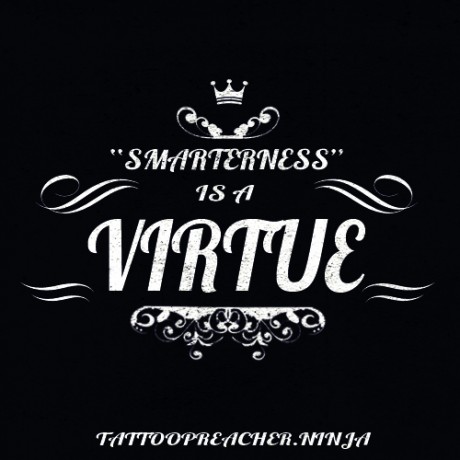 Cogito ergo sum – I think therefore I am…

As a man thinks in his heart, so is he…  So, what if his thinking is wrong…?  How will he ever discover it…?

Most people only study subjects agreeing with what they already think, or choose friends that only think like they do, or watch/listen to programming that only confirms their current perspectives.

I think we are all guilty to some extent and I’ll be the first to admit that there are some people’s viewpoints that irritate me to no end but more often than not, it is the MESSENGER (and his packaging) and not the message that I take issue with.

I don’t have a problem with people having a difference of opinion or weighing their opinion against my own, but I lose interest in balanced analysis if I perceive that they themselves are not balanced.  Again, not rejecting the message but rather the messenger (see American political party allegiance regardless of issue for additional perspective).

I love to learn.  A passionate pursuit of mine is understanding what others think and why they do as they do.   This is why I study and watch programming and documentaries on sociology, psychology, science and history.  I also read quite a bit.  I am currently reading Michael Turners book called Watch Me Daddy, The Cry of the Generations (ww.MichaelTurner.tv).  It’s about growing up without a father or dealing with the rejection of a father (even though I grew up with a great father).

As a leader I recognize that statistics reveal that our society is producing more and more adults who grew up without the direct influence of a father in their life and unless I educate myself on how that demographic thinks or feels, then any opinion I form on the subject will be limited to my personal experience (which in this case is nonexistent).

Christians are not typically reputed to be open-minded beyond their personal experiences.  Nor are they often viewed to be fair in their thinking outside of that experiential box.  I’m not comfortable being lumped into that generalization so I do what I can to broaden my perspectives.

So why am I voicing this today?  I don’t know if I have ever openly admitted this, but typically when I write, my readers “today” are a secondary target.   I’m writing to my 6 year old son years from now, whom I will hopefully always have a direct voice of influence with, but if not, will never wonder what his father thinks when he looks back on what I have written.

There is an underlying life lesson in this particular article that took me many difficult years and life lessons to even begin to understand how to institute…Hopefully, my input broadens your perspectives and with the influence of a father who attempts to be fair and balanced, will produce a son who embraces that broader outlook much earlier than I and will be that much further along in changing the world when he is my age.

I’d like to know what you think… Are Christians more closed minded than other “types” of people or is this simply a human characteristic? What, if anything can we do to change it? Do we even need to?