Official Site of the Tattooed Preacher > Christianity > Settling for Silver 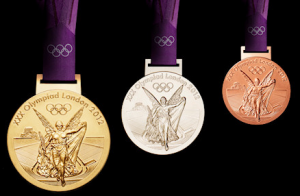 How many times have you looked at the circumstances and settled for silver when that top spot on the podium could have been yours?

I’ve been reading the book, Watch Me Daddy; The Cry of the Generations by my friend, Pastor Michael Turner…It’s got me thinking…

A couple of months ago, my 6-year-old son, Rocky got a bronze metal in a Jiu-Jitsu tournament.  He gave his best but was beaten by two other competitors.

As he was faced with the dilemma of having to compete against the same guys who beat him the last time he asked me,  “Daddy, do you think I can take silver this time…?”  What an interesting and telling question…

There’s nothing wrong with finishing second but I wasn’t willing to encourage him to settle for silver because I knew there was gold in him.  I told him that I believed he had what it takes to win it all and to not allow fear of another loss to keep him from being the best.

There is something about the affirmation of your Father.  Knowing He believes in you…knowing He’s watching.

“When Dad is watching, we dig deeper, play harder, dream bigger and go higher than we every could without him.  When dad believes in us, it gives us greater courage to believe in ourselves…” – (excerpt taken from Watch Me Daddy)

Jesus always knew his Father was watching and lived for the glory and honor of his Father.

Today, in light of this thought process, I find myself wondering if there is more to be understood of Jesus “living for the glory and honor of his Father”…. I guess I never really placed myself in his shoes as a son, questioning his motivation for why he did what he did.  I just accepted the fact that he did it…

When you know your Daddy is watching and you know He believes in and loves you, something simply changes in how most will respond…

Now, I find myself questioning my own motivation in certain circumstances by asking, how would I respond differently today if my sole motivation were the glory and honor of my Heavenly Father and not______(fill in the blank).

In the example of my son, despite facing a previous loss, being tossed to the mat, and even almost choked out Rocky looked to his daddy who continued to believe in him through the adversity…he pressed through the pain, refuse to quit and in the end, he DID take Gold!

Today your daddy’s watching, do you throw in the towel because you don’t think you are good enough or do you continue to fight and press through the adversity because He says you are…?

Ultimately the choice is yours but I hear Him, your Father & biggest fan cheering from the sidelines, “I BELIEVE!”

The question is, will you…?