Resolved to Being a Jackass 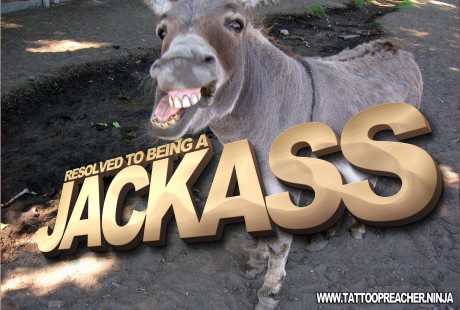 I’m convinced that I am the 2nd nicest guy in the world…And in being that “nice guy” there is one area of my life I am resolved to being a “Jackass” whether I (or you) like it or not… But before you take issue with my choice let me explain my position as it may change how you initially processed it and you might just learn something from it.

I ran into a friend today at Starbucks. I asked him how a ministry event that he recently attended went and his response was, “The pastor asked me to be a part of the ministry prayer team in an area that I’ve never ministered before…I wasn’t going to NOT do it for a lack of experience but it was very intimidating…”

I was proud of him & I laughed because anyone who has ever been in any leadership position at some point will have their willingness to step outside of their comfort zone confronted. I knew it was a great opportunity for his growth and just responded, “Don’t ever lose sight of who is actually performing the ministry… You’re the vessel that God does the work through…”

In Matthew 21:7 Jesus tells his boys, “Go get me a donkey to ride on (KJV uses the word ass)…” and then proceeds to ride into the city on it while people laid palm branches at the donkey’s feet.

If you don’t stayed resolved to being the Jackass that God is using to accomplish what He needs to accomplish, you may be tempted to think that those palm branches & praises have something to do with you.

You can’t lose sight of the fact that any breakthrough experienced in the lives of people in your presence is only because of the One riding on you… The hype that may result because of that breakthrough is again only because of He who is riding on you… The fact that God used you to be a part of His plan is SUPER exciting, the fact that they received breakthrough is AMAZING! BUT keep it in perspective, otherwise the second that you resolve that you are anything more than the tool used to bring the King and His Kingdom into your “city” you negate the honor in being who He used.

The good thing about being resolved to the position of the Jackass is that no matter how people respond (or don’t) it doesn’t dictate what you do. You go where the rider leads and He does what He does when you get there. From that position, there should be little intimidation because the results do not rest upon your shoulders.  You carry the one who brings the liberty.

Being the conduit does come with its own responsibility and honor of obedience but it is in no way the same as being the source… Even if you know you are not the source, make sure that how you carry yourself afterward knows it as well…

After all, a jackass without the honor is just a jackass…