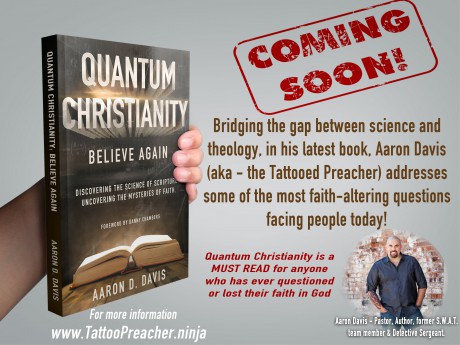 I’m pleased to announce that the 4 year journey of developing and writing Quantum Christianity: Believe Again is FINALLY in the home stretch!

The finishing touches are being put into the book cover by the designer as I type this update.  The interior of the book has been typeset and laid out for print and two editors are currently doing a final proof to make sure that we haven’t missed any mistakes.  All things going as they should, Quantum Christianity should be available for purchase no later than May 1st, 2015!

So why did it take so long to complete?!  – This book is pretty involved.  I did a lot of research into the science end of it, I wrote it from a perspective and with a style that I never attempted before, and finally, working with my editor really pressed me to not settle for “good” when the content deserved a “great” effort on my end.  Everything about this project stretched me.

I wrote Quantum Christianity to address some of the most difficult questions that I have heard from people who have had their faith rocked or lost it all together as a result of some sort of faith-altering moment in their lives…Everyone I know has had them, and they have all processed those moments differently.  Whether you’ve experienced pain and not understood where God was in the midst of it, or you have not been able to resolve that God is who the bible says He is because of your own conflicting experience and perspectives, or perhaps you are convinced that science disproves God altogether…Quantum Christianity unveils additional information on issues that are often simply brushed off by Christian leaders as “unknowable expressions of God’s will and/or sovereignty” while directly confronting the possibility of there being “more” available to us from both and understanding and experiential perspective.

Having not only written it, I’ve read the book multiple times now myself… It is a FUN, CHALLENGING and ENLIGHTENING read!  I’ve spent my entire life in church and never heard taught some of the content that is addressed in this book!  I believe it will be a significant catalyst for change in the lives of those who read it!

I want to thank all of you who have contributed both financially and cooperatively to this project.  Several have asked if they can still contribute and the answer is a resounding YES!  Printing is the most expensive part of publishing and I am getting ready to go to the presses with this book!  I am still offering the same appreciation bonuses for anyone who would like to contribute!  I have a page dedicated to this information at this link:  https://tattoopreacher.wordpress.com/opportunity/

I appreciate all of your prayers and support!  I’m so excited for this next season!