Love Wins – And When It Almost Didn’t In Me 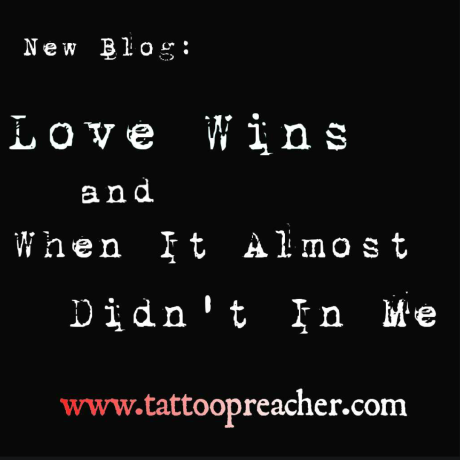 There I sat in a meeting pitching my latest book Quantum Christianity: Believe Again to one of the most influential marketers of all time and his friend, the president of a book publishing company.

20 minutes into the interview, one of the gentlemen surprisingly asked me, “Is this going to be another one of those Rob Bell books stirring up a bunch of controversy?” I knew the book he was referring to was “Love Wins” and I confidently responded, “No, not at all, this book is biblically based with scripture to back up everything that is proposed…”

An hour after my meeting with these gentlemen I was replaying the conversation in my mind and got to that statement…I winced and shook my head at my response as my subconscious chastised me, “HOW IN THE HECK DO YOU KNOW?! YOU HAVEN’T EVEN READ THE BACK COVER OF THAT BOOK, LET ALONE CRACKED THE PAGES?!”

That’s not like me. I’m the guy who studies all kinds of different information on varieties of topics of interest from Business to Science to World Religions so that I don’t have to take someone else’s word or puppet someone else’s position if ever asked (Theology just happens to be the arena that I have dedicated my life to and I read EXTENSIVELY on diverse positions on that subject). I was familiar with the church that Pastor Bell came out of, listened to some of their podcasts over the years (but admittedly never any of his teachings personally). I had formed an opinion of the ministry based upon very limited exposure to another pastor on staff there. Then, when Pastor Bell wrote a book that received such controversial reviews, I simply accepted them because they conveniently fit within the mold of some personal biases that I had already developed and lumped him into them.

I’m being transparent about my process because I believe many do this daily with any number of issues, people groups or affiliations. But I want to say very publicly, I WAS WRONG!

Feeling like an jerk for judging a man’s work while having never read it myself (which has happened to me so many times), I immediately went out and bought Pastor Rob’s book in every format I could. Digital, Print and Audio and I read and listened to it for a few weeks…I chewed on it, I weighed the heart and reasoning behind his writing of it… I considered heavily why someone would take the time to develop and write THIS MESSAGE and not any number of other messages (or revelations) that God may have given him…and even today I find myself challenged for having read it.

Sitting by the pool at a pastor’s conference a few weeks ago I reiterated this story to a friend who is also in ministry. He asked me, “So what did you think about the book Aaron?” I chose my answer much more wisely this time and said, “I’ve yet to read a book that I 100% agree with. Quite honestly, in most books I read, I find myself agreeing with a percentage (sometimes a small percentage) of the content and finding cause to disagree with the rest. But I don’t read or study books to confirm and reiterate what I already know or agree with, I read them in hopes of learning something that I don’t know…and as is often the case, I might read an entire book and only walk away with a single concept to better myself with…BUT IF ONE CONCEPT HELP’S ME GROW IT’S WORTH IT!”

With pastor Rob’s book, the central theme is the depth of the love of God (both from God and through us). He alludes to a few concepts that may or may not be interpreted as “universalist” mindsets but this book was NOT an attempt at doctrinally gagging people by shoving “a heretical philosophy” down their throats as I might have assumed before reading it by the many opposing critical reviews that I heard and read online…and those who disagreed and made it out to be “that” or could only see that one underlying possible implication, missed a very valuable message on God and Love clearly conveyed within the rest of the pages.

I went on to tell my friend, “To be quite honest, I did with this book what I always do, I ate the meat that fed and challenged me and spit out the bones of what I didn’t necessarily agree with…but without a doubt the meat was worth the eat!

Concluding this blog that is 3x my normal length, the walk away for me writing this today has nothing to do with endorsing a book or a pastor who has been criticized for his interpretation of scripture. The reason I’m writing is for you to have insight into my process for learning a lesson.  Nearly every experience has SOMETHING that you can learn from it if you are discerning (even that with which you don’t completely agree).

It’s so easy to write off people and ideas because someone else says or negatively implies that we should (as I did in this case).  Religion is notorious for looking for reasons to divide. But division was a Pharisaical institution, not what Jesus modeled.

If you haven’t read the book, don’t make this blog into something it wasn’t intended to be by responding to it with comments and pontifications about how we need to be weary of false doctrines. Everyone has been taught to believe that and it goes without saying…(not to mention that every denomination that has ever been formed was based upon doctrinal differences regarding scriptural interpretation – so nobody’s got “the truth” wrapped up.)

One thing that nearly everyone outside of the Westboro Baptist church doctrinally agrees upon is that the bible clearly states that “God is Love” and we should not only “Love our Neighbor’s but even our enemies”.

So consider this, whether you believe in Hell or not, Hell becomes a moot point and loses its place as an argument or option in the lives of those who have been transformed in response to God’s love and when the kindness of God touches peoples hearts through you and draws them into a “changed mind” (which is actually the proper interpretation of the word “repentance” – we’ll save that for another blog)

As long as we are intentionally pursuing God and establishing His Love within our sphere’s of influence in a 1 Corinthians 13 kind of way, I am convinced that “Love Conquers All”… Or maybe better said, Love Wins.

Thanks Pastor Rob for sharing your heart about Love with us, I trust our paths will cross one day and I’ll have the pleasure of hugging your neck, not hindered by our possible doctrinal differences but rather intentionally walking in love in the belief that in the end, Love does win.

The views here are my own and do not necessarily reflect those of my employer OasisChurch.tv