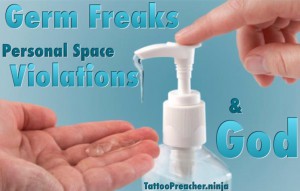 A few years ago a friend called me out of the blue asking me to go with him to watch a fight at the home of one of my favorite musicians. I had been a fan throughout my teen years & jumped at the idea of meeting him.

When we arrived at his home, he opened the door, introduced himself to me and gave me the HUGEST hug!

I didn’t know what to do…My body tensed up and I FROZE! I wasn’t a hugger & on the rare occasion that someone did hijack my personal space, I would immediately turn my shoulder into them, pat them 3 times on the back with the manly “I’m-Not-Gay” pat/hug and then sought to quickly retreat back into my own personal comfort zone.

But not this time, he grabbed me with a huge chest-to-chest bear hug and didn’t let go! It was the longest 5 seconds of my life as he hugged me and said, “Welcome to my home”…

I could take 500 words to psychoanalyze my response but suffice to say, that hug messed with me in a BIG way. I’m a personal space respecting, germ freak who carries sanitizer EVERYWHERE I go and if someone besides my close family told me they loved me, I would simply respond, “Ditto”. (You get the picture?!)

It messed with my head!  I could not deny the love I felt by his willingness to hug me…a stranger…and it challenged me! I thought about that hug for several weeks because, as much as I hated to admit it and as uncomfortable as it made me, I knew inside that I had needed it! I was in the most broken and difficult season of my life and the embrace of someone I looked up to ministered to me in a way that I had never expected or experienced.

Fast forward now nearly 7 years and I have a different perspective and intentionality. What I realize now is that people are hurting and few things convey a heart of love like a willingness to embrace another human being.

This past Friday evening, I was alone walking the streets of Nashville until well after midnight. Much of that time spent talking with and praying for different homeless people. As I was leaving I hugged one of them and told him I loved him…and for a brief moment I saw myself 7 years ago in his eyes…

Buying him dinner and praying for him was appreciated but when I hugged him and said those 3 simple words, THAT’S when I saw the tears well up.

As I left a few minutes later his response was not the typical “Thank you”, but rather, the man who moments before told me he had nobody in Nashville, in a crowd of people was yelling over the roar of my pipes, “I love you man!”