Official Site of the Tattooed Preacher > Christianity > Christians Are Wieners 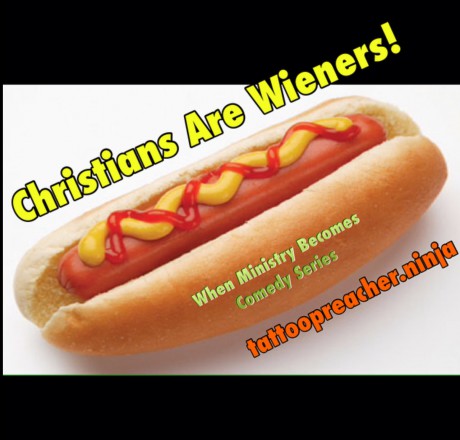 Now before you get all bent, realize that things are rarely as they appear with me & this title is part of my “When Ministry Becomes Comedy” series… It will all make sense in a minute…

Many years ago I was attending a church in Troy, Michigan (a city in the most affluent county in the state). Considering the size of the church and common church practices in the late 80’s and early 90’s it was not terribly uncommon at the end of the service for someone to share a personal testimony of something that God had done for them or if they felt like God revealed something to them during the service to get up and share that with the rest of us.

I was probably 17 years old at the time and running the soundboard with the pastors son, Benjamin (who was a year older). The service was ending and one of the church members, a Romanian man in his late 30’s named Marcel, asked if he could share something.

The pastor relinquished the microphone & Marcel began to share. For those unfamiliar, Romanian-English accents are not too difficult to process, you just have to get used to the vowels being a little exaggerated. For instance, the short “I” sound in English is a long “E” (EEE) in Romanian. Most of the time, that will easily translate without a hiccup. But not this Sunday… Because God had spoken to Marcel’s heart that “His people were all WINNERS!” – Are you tracking with me yet…?

Benjamin and I were literally laughing so hard that we were crying… I couldn’t breathe! The rest of the congregation was trying to be polite and dignified and were all half reluctantly declaring “I AM A WIENER” with Marcel as Ben and I began singing,

“Oh, I wish I was an Oscar Mayer weiner,
that is what I’d truly like to be…”

It was an unforgettable moment that I’m so glad that I have as a memory and I’m happy I was able to share it with you on this “Friday-Funday” post.

So, in order to reel this back in for some sort of moral or application… I just want to encourage you today with this… YOU ARE A WIENER! And not only is it okay, God made you that way- and don’t ever let anyone tell you different! – Now let’s go fire up the grill – (whistling the Oscar Mayer song in my head as I close this down…)