Official Site of the Tattooed Preacher > Uncategorized > Changing Our Focus 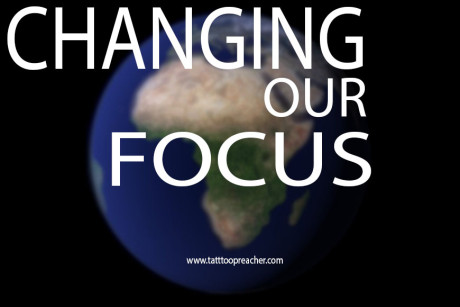 Somewhere along the line we became convinced that government was the answer to our woes and legislating our values was the means to the “Holy” end… After all we are “One Nation Under God”…Right?

This kind of thinking simply doesn’t work because laws do not change the heart. Prohibition is a perfect example. I’m the first to say, I don’t want my son going to McDonalds and being surrounded by guys legally snorting cocaine off the dining room tables. So laws do serve a purpose as a semi-enforceable standard (in so much that it forces the behavior underground and it becomes an “out of sight out of mind” scenario where “If I don’t have to see it, it’s not MY problem…) but for too many, legislation has become the “answer” in their minds…and it’s not. Legislation does not stop the root of the action whether you see it or not…whether it’s legal or not.

In the Bible, Shadrach, Meshach, Abednego, Daniel, Joseph, Jesus, Paul and every disciple all lived in cultures where immorality was the norm. The governing leaders worshiped pagan gods and some of their common legal practices even included behaviors as repulsive as public bestiality and the sacrifice of those who didn’t conform to their worship standards.

I’m thankful that this is not my reality today but it serves as a challenge to me because all of these listed were STILL able to transform their culture in spite of the depravity that they were surrounded by! The transformation was not about new legislation. They didn’t leave it up to the government to set the standard. They used THEIR God ordained authority and changed culture from within.

Telling people about a possible transformation isn’t likely to transform them…but showing them has a way of convincing beyond preconceived ideas. Today, I’m wondering if “a form of Godliness that has been devoid of power” is not the catalyst for our current “Christian” and political reality…Leaving me with the obvious question, what needs to change and how might we be able to transform culture today in a way that is different from previously unsuccessful attempts.

Do what you’ve always done…Get what you’ve always got…Right?  Maybe there was something to the whole, “These signs shall follow them that believe” thing that Jesus talked about… One thing’s for certain, it seems obvious that telling people they are wrong or going to hell isn’t making much of an impact.

For more information on what that might look like and how that may be possible today, check out my book Quantum Christianity: Believe Again

*The views expressed here are my own and may not be representative of that of my employer OasisChurch.tv