30 Second Sermon: Get Your Dogs In The Fight

Official Site of the Tattooed Preacher > Christianity > 30 Second Sermon: Get Your Dogs In The Fight 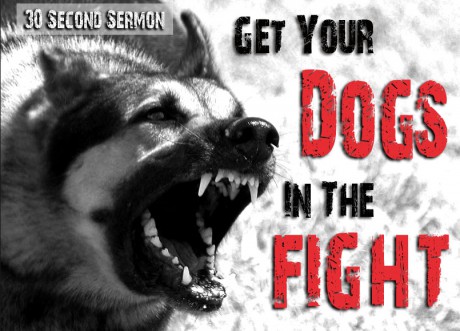 When you’ve got no Dogs In The Fight, it changes how you process…and it can impact your outcomes significantly.  I watched the BCS playoffs this past week. Because my team was not playing in a game, I felt like I had no “dogs in the fights” so I sat back and I watched as an outsider with no emotional attachment to the games.

Reflecting back now there is something interesting that takes place when YOUR team scores a touchdown or makes a big play versus when someone else’s team does. When it’s YOUR team, no matter who is carrying the ball, the entire team celebrates the player’s accomplishment! Not only does everyone wearing the uniform on the field celebrate but every “team member” in the stands and watching on TV around the world!

Everyone celebrating doesn’t “know that player” but he represents THEIR TEAM and they celebrate his victory! Furthermore, when a bad call is made, the “team” worldwide is appalled at the injustice! Because that was their player and their team that was wronged…and then it hit me…

It’s time that the team of Christ slips on the “team” jersey, fills their position on the TEAM, backs each member of the TEAM up and celebrates the accomplishments OF THE TEAM (even when they haven’t personally made the play)! This is a game where much more than a scoreboard hangs in the balance! A kingdom divided against itself falls…

Too many who call themselves “Christian” have divided alliances rooting for their position rather than the entire team (denominationalism/intellectualism vs Kingdom advancement). Like I did on Thursday, they observe other players, emotionless because they haven’t realized that “the other guy” IS a member of “THEIR TEAM”…They sit back numb, failing to comprehend that the rest of the team suffers because they aren’t filling their lane FOR THE TEAM!

Maybe it’s time to get your dogs in the fight!